While many lump all coloured horses together as "Pintos" and "Paints", there are actually many distinct - and not-so-distinct, colour patterns. "Tobiano" is just one of the terms used to describe the pattern of white and coloured patches found on the "coloured"(piebald and skewbald) horses.

The Tobiano may either be predominantly black/brown or white. Body markings will usually be large on the body and distinct, with rounded or smooth edged patterns that extend down over the neck and chest giving the appearance of a shield. The white will most usually cross over the spine of the horse between the withers and the tail.

The head will usually be marked like a solid-coloured horse, sometimes being solid or having a blaze, stripe, star or snip. All four legs will usually be white, at least below the hocks and knees. However, purists will say, that a "true" Tobiano, carrying no other colour genetically, will have a solid dark face with no white. "True" Tobianos are actually extremely rare.

Those which we these days refer to as "Tobianos" - are in most cases a mix of Tobiano and other patterns. I have never yet seen a true Tobiano Gypsy Horse. Not saying they don't exist, but given their background I doubt there are any about. Rather than get into extremely technical descriptions here, we will consider all horses of patched colour with white, as Tobiano.

Tobiano is inherited by a simple "dominant" gene, so you only need one copy of the gene for the colour to be apparant(displayed)So if a foal is Tobiano, you know that at least one parent was also Tobiano. If one parent is tobiano and one is solid coloured, for the offspring to be coloured, the tobiano parent has to pass on the tobiano gene. Therefore, there is a 50% chance, every time, of the offspring being a coloured/colour-patched, foal.

If both parents are tobiano, and each carry a single copy of the tobiano gene, there is a 75% chance of the gene being passed on (as each parent has a 50% chance of passing it on). This occurs when each of the coloured horses being used for breeding had one solid coloured parent and one tobiano one.

A horse who carries two copies of the tobiano gene, is called "homozygous". A homozygous horse can only be produced from two tobiano horses, and will occur 25% of the time (as 50% will be heterozygous, and 25% will be solid coloured). A homozygous horse will always produce a coloured offspring, regardless of the colour of the other parent. Within all the colours, the pattern is expected to display on different levels. 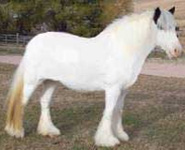 This Colt, is a "Minimal Expression" Tobiano. 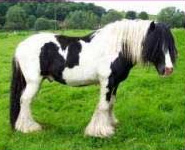 This is a "Medium Expression" Tobiano. 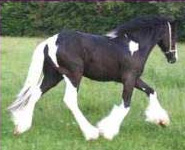 This is a "Maximum Expression" Tobiano. 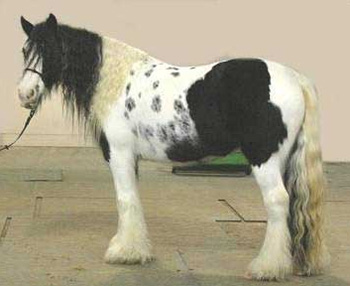 However some might classify her as a "Tovero" (See below)

Here's a wonderful example of a Tobiano mare with tons of Inkspots. Inkspots such as these - although not always so pronounced, often mean the horse is Homozygous for that colour. Not always, but more often than not. Don't be fooled however, into thinking that if your horse has no inkspots, that it's not Homozygous. Many Homozygous horses display no inkspots at all.

Sabino, Splash, Tovero and Frame coloured horses, are most often lumped together under the name "Overo". Some of the above, have quite distinct markings, while others might be more difficult to distinguish. Others might display several types of colour patterns, making true identification quite difficult.

Overo horses, while patterned much like Tobianos, generally have white under their bellies and on the sides of their abdomens and necks. The white usually does not cross the back of the horse. At least one leg, and often all four, will be the dark color.

Head markings are often bald, apron or bonnet-faced and the white markings on the body tend to be scattered, splashy or rough-edged. The tail is usually one color. In the past, it was always assumed that the overo pattern was due to a recessive gene because of the unexpected and unpredictable occurrence of overo foals from two horses of solid color (cropouts). According to Dr. Ann Bowling, of the University of California at Davis Veterinary Genetics Laboratory, who reviewed studbook records and photographic archives from the American Paint Horse Association, it appears that the overo pattern "is" transmitted as a dominant gene.

By following the model of overo being transmitted as recessive, breeders interested in producing color would often cross two overos, assuming that the product would be another overo. By crossing two horses homozygous recessive for a gene, the only result could be another homozygous recessive. As it turns out, three possibilities occur from the crossing of two overos: overos, solid colors, and the lethal white. White foals fail to pass food through their digestive tract due to a lack of nerve cells in the intestinal tract (aganglionosis), a lethal defect. A rare human genetic disease associated with a white forelock (Hirschsprung disease) and at least three white spotting genes in mice cause similar problems.(The "Lethal White" problem is also noted in many dog breeds. ie. Harlequin Great Danes, Boston Terriers, Bulldogs, Border Collies, Australian Shepherds and many more.)The three classes better fit a model of overo being transmitted as a dominant gene with the lethal effects in the homozygous overo condition.

By following the model of overo being transmitted as a dominant trait, breeders can cross an overo to a solid and expect a 50% chance of getting another overo instead of the previously thought chance occurrence. The studbook records of various cropout Paint stallions (product of two solid parents) revealed that when bred to solid mares, approximately 50% turned out overo and 50% turned out solid. Furthermore, with overo being dominant, the solid colored foal from a solid to overo cross probably would not carry an overo gene to be passed on. If breeding for color, crossing two overos may not be the best choice because of the chance of getting a lethal white foal or the chance of getting a solid colored foal.

"Sabino" and "splashed white" are names sometimes given to other white patterns which fall into the overo category. Though definitions vary, sabino horses generally have four white socks, a white belly and face, white on the insides of the stifles, and either the edges of the markings or the whole body will have a lot of roan coloring. On Sabinos the patches of colour have very ragged edges. They are also most often, marked by a lip spot on an otherwise extended white face. Some, as the cute mare below, displays Sabino and Tobiano markings which is not unusual since both genes may be present in the same horse.

It should be noted, that there are many different types of Sabino and tests are still not available for all. Some Sabino horses can be obvious, by certain characteristics they display but others, quite well could be sabino and white, blue roan and white or gray and white. Some fade with age and some don't. Sometimes this does help to identify just what colour a horse might be, in the absense of the ability to test for certain colours. 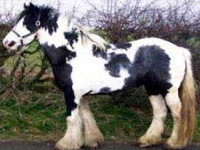 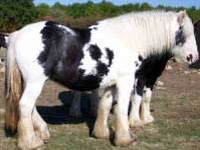 Tovero horses combine the characteristics of both overos and tobianos and often have a substantial amount of white throughout their body. Tovero horses appear to have two different dominant white pattern genes. When two toveros are crossed, or when a tovero is crossed with a solid, four possibilities occur: solids, overos, toveros and tobianos. It should be noted that there is no actual Tovero Gene. It's purely a name given to horses when they display several different types of coat pattern.